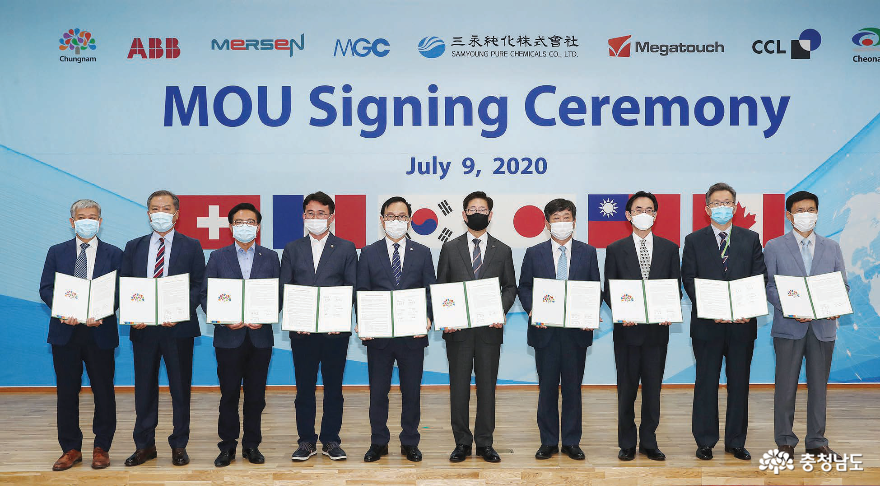 Investments with global blue-chip investment companies successfully wrapped up in the Chungcheongnam-do Province
On July 9, Governor Yang Seung-jo entered into an MOU for foreign investment with five global blue-chip investment companies at the conference room in the provincial government building. The five companies are namely: Mitsubishi Gas Chemical Company of Japan, Megatouch of Taiwan, Mersen of France, ABB Power Grid of Switzerland, and CCL Industries of Canada.
According to the MOU, these companies will invest a total of USD 65 million over the next five years to establish manufacturing factories in the Cheonan Foreign Investment Zone and the Cheonan Foreign Investment Zone 5 and construct production facilities. The construction of new factories is expected to create 205 new jobs.
Subsequently, on July 27, the province successfully attracted USD 113.6 million investment from three foreign investment companies in the US and Netherlands. The three companies that entered into the MOU are Air Products and YK America of the US and Bimbo QSR of the Netherlands.
These companies plan to construct and extend factories in the Asan Tangjeong Display City, the Inju Foreign Investment Zone, and the agricultural-industrial complex site in Yeongin over the next five years and subsequently create 120 new jobs.
Governor Yang said, “We are thankful that foreign investment companies decided to invest in the Chungcheongnam-do Province in the midst of hardships brought about by the COVID-19 crisis. We wish for more global companies to invest in the province during the latter half of the 7th provincial administration and create an opportunity to overcome the economic crisis in the post-COVID-19 era.”
Meanwhile, the Chungcheongnam-do Province has been striving to attract foreign capital via online conference even during hardships for local overseas marketing. As a result, the province successfully attracted foreign investments with twelve companies according to the annual plan.