Beat tiredness and recover health in a warm hot spring

URL 복사
창닫기
Deoksan Hot Spring is a famous hot spring mentioned in literature written 500-600 years ago. ‘Chungbo’ written by Yi Yulgok, a Confucian scholar during the Joseon Dynasty talks about a story about the origin of the hot spring: “Having seen a crane keep standing in the middle of a paddy field, locals approached it and found out that it had wounds on the wings and legs. Then they saw the bird keep applying water to its wounds. Three days later, it flew away. Curious, residents approached the spot where the crane sat and saw warm and smooth water coming out of the ground. Since then, locals have used the water to treat skin disorders and neuralgia. Hence the village has been called oncheongol (hot spring village).
A local legend also says, “There lived a diligent farmer in Sadong-ri, Deoksan. His family was poor, but after he grew up, he worked hard, cared for his mother very well and did his best to look after his children after marriage. He was doing okay. However, as a drought continued for a couple of years, he and his family severely suffered. He kept working on his paddy field, but he could no longer supply water to his rice plants. One day, watching the rice plants withering, he remembered seeing a patch of grass growing well in the middle of his land that he was planning to turn into a rice field. He kept digging beneath green grass with a hoe. He found underground water which happened to be hot. Heaven is never indifferent to a diligent good man. The farmer then became the owner of a hot spring and lived happily ever after.”
Deoksan Hot Spring was opened as a public bath in 1917 by a Japanese man called Yasui. It is a natural sodium bicarbonate hot spring that contains germanium considered to be a miracle healing agent. The hot spring is believed to be helpful in the treatment of various conditions such as muscle pain, arthritis, neuralgia, vascular circulation trouble as well positive impact on subcutaneous fat removal and cell regeneration promotion. It has become a representative tourist destination of Yesan with 2.5 million annual visitors. The hot spring zone is popular among tourists for various convenience facilities including 7 hot springs, over 50 accommodations including a hotel and two tourist hotels as well as numerous restaurants and eateries.
Deoksan Hot Spring in Yesan-gun
Address Deoksan-myeon, Yesan-gun, Chungcheongnam-do, Korea
Area 3,092,079㎡
Water temperature 25.5 - 49.1℃
Reserves 6,547,153㎥
Water quality low-alkaline sodium bicarbonate water (Na-HCO3)
No. of hot springs 41
No. of businesses 17 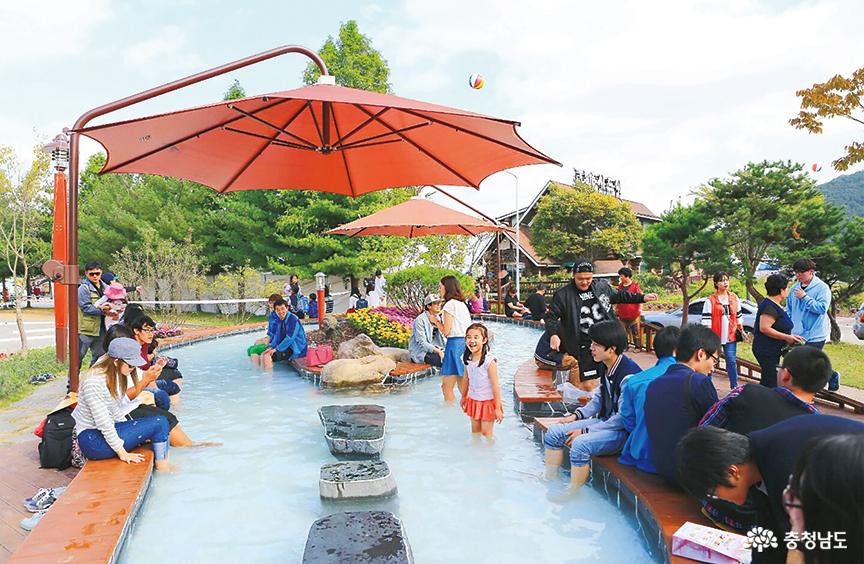