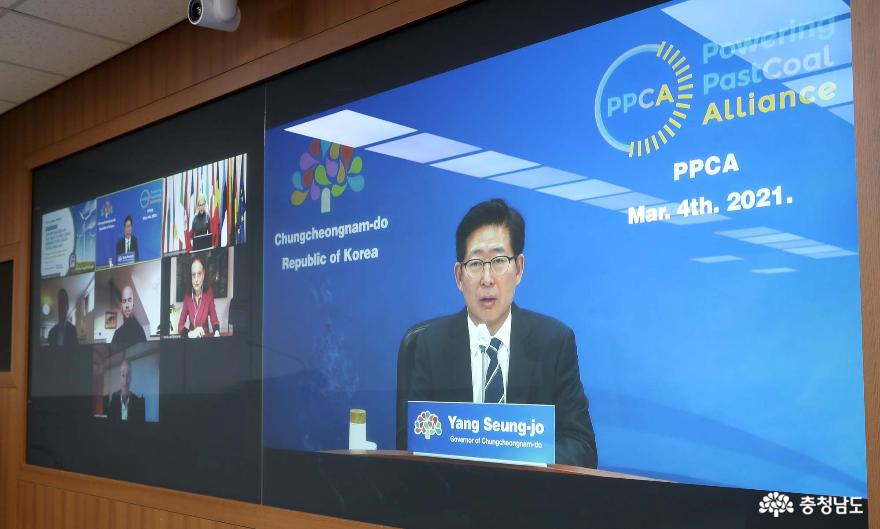 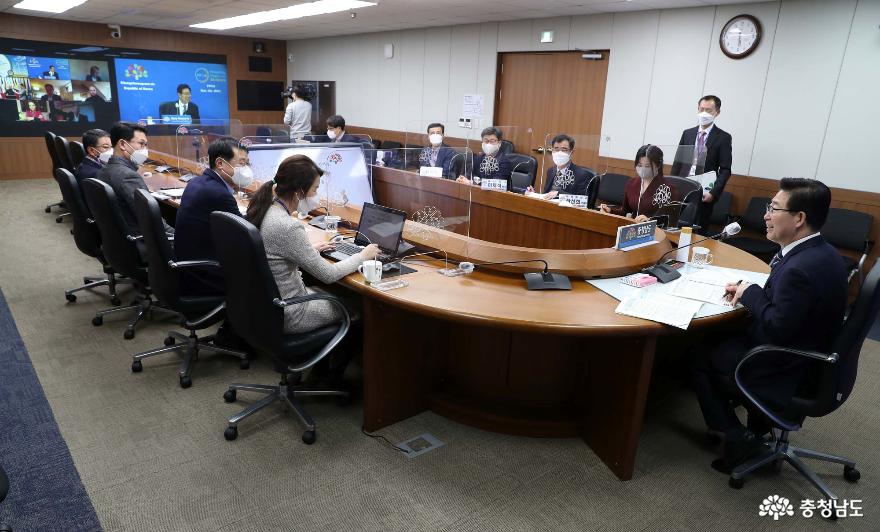 
Governor Yang shared his thoughts on the tasks to completely phase out coal, find solutions, and build partnerships.

Governor Yang Seung-jo was invited by the PPCA Summit, co-hosted by the Danish government and Bloomberg Philanthropies, as a representative of Asian local governments and introduced the province’s coal phase-out policy.

That was one of the PPCA Summit sessions held to share plans and experiences for successfully achieving intermediary coal closure targets.

The discussion was held through an online connection between Chungcheongnam-do, Copenhagen, New York, and Amsterdam featured Governor Yang, Carola van Rijnsoever (the Ambassador for Sustainable Development and the Arctic Ambassador at the Ministry of Foreign Affairs of Netherlands), Hendrik Gordenker (Director, JERA, Japan’s largest utility company), and Ulrik Stridbæk (Head of Regulatory Affairs of Ørsted, the largest utility company of Denmark).


The session was presided over by Dan Jørgensen, the Minister of Climate and Energy and Public Utilities of Denmark, and Antha Williams, leader of the environment program at Bloomberg Philanthropies.

The discussion began with a keynote address by Kadri Simson, EU Commissioner for Energy, followed by a panel discussion where four panelists, including Governor Yang, fielded questions.

At the Summit, Governor Yang presented the province's proactive coal-phaseout policy, noting that Chungcheongnam-do hosts half of the 60 domestic coal-fired power plants, transmits over 60% of electricity generated by these plants to other provinces, and accounts for 22% of the greenhouse gas emissions by Korea.

Governor Yang listed the tasks to attain the province’s coal phaseout goals: (i) employment decline and job conversion of workers; (ii) economic recession due to a crisis in a core regional industry; and (iii) the emergence of the necessity for building eco-friendly power plants that replace coal-fired power plants.

As for the economic recession, he said that he would propose that the government designate the region as a “special area for industrial crisis response” and create new regional economic development sources by establishing an energy transition fund.

Concerning establishing a cooperative system with utility companies and the national government to attain the coal phaseout goals, he explained that Chungcheongnam-do has been working towards a carbon neutrality policy and has maintained close collaboration with the government by proposing projects.

The governor also added that the province declared its carbon neutrality goal one year ahead of the national government and proposed a Green New Deal with proactive efforts, producing legislative proposals, such as Special Acts on the Green New Deal for a Just Transition toward a Decarbonized Society, and Acts for the Selection of Financial Institutions for Local Governments.

Furthermore, Governor Yang said that carbon neutrality is a tough challenge and mission that must be realized for the world and that the province will achieve carbon neutrality by 2050 by close cooperation with local residents, the provincial council, and civic organizations.