Rise of ‘Strong Chungnam’ driven by the power of Korea

Kim Tae-heum, the 39th governor, said, “He will achieve a takeoff to serve the aspiration of 2.2 million provincial residents.” 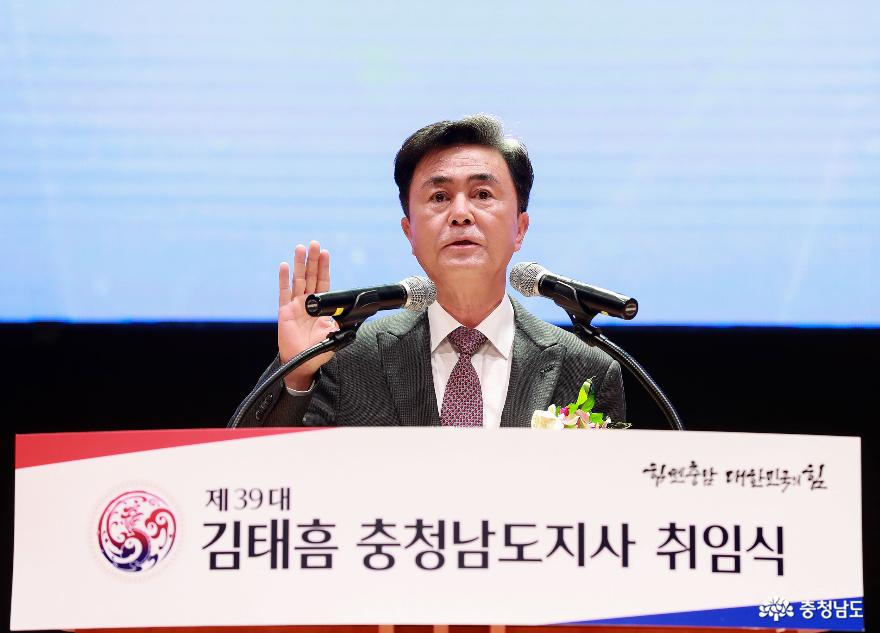 ▲ The 8th governor of Chungnam, elected by popular vote, Kim Tae-heum taking the oath of office at the inauguration ceremony.

‘Strong Chungnam’ refers to the new governor’s vision to write a new history for Chungnam, serving the aspirations of 2.2 million Chungnam provincial residents.
Based on dramatic economic growth, the province will lead the development of Korea, realize an inclusive and elegant life for residents, and serve the will of everyone.

At the inauguration ceremony at the Culture & Art Center on July 1, the 39th governor, Kim Tae-heum, declared the launch of his vision, “Strong Chungnam.”

With 700 people in attendance, including representatives from various sectors such as the elderly, disabled persons, farmers, fishermen, businessmen, multicultural families, medical professionals, women, youths, and the heads of organizations and institutions, the ceremony proceeded with video clips about the provincial administration vision, the oath of office, the inaugural address, a congratulatory message from President Yoon Seok-yeol, and the planting of a commemorative tree.

Governor Kim said in his inaugural address that he would answer the solemn call of residents asking him to fundamentally innovate Chungnam and realize the high potential of the province. He stated, “I will achieve a robust take-off for Chungnam to serve 2.2 million residents.”

Kim said that he will achieve vigorous economic growth.

That means he will closely examine the flow of changes in the era of great transformation and prepare for the future.

Governor Kim explained that the province will focus on fostering future strategic industries, such as semiconductors, displays, electric vehicles, biotech, and rechargeable batteries, finding alternatives to coal-fired thermal plants, promoting a carbon-neutral economy, and expanding the transportation network and logistics infrastructure to rewrite the economic and industrial landscape of Chungnam and lay a firm foundation for a strong economy.

He will promote “the economy led by regions.”

Governor Kim revealed his vision to relieve regional imbalances that hinder sustainable growth and pave the way for new growth through balanced development.

To that end, he presented various plans, including the building of a digital city in Cheonan and Asan, cultivation of an international marine leisure and tourism belt in the West Sea region, completion of Naepo Innovation City in Hongseong and Yesan, promotion of culture and tourism in Gongju, Buyeo, and Cheongyang, and the development of a defense cluster in Gyeryong, Nonsan, and Geumsan.

Furthermore, he said that the province will cultivate human resources for future industries, promote young and smart agriculture and fisheries, and develop a new marine industry. He emphasized that based on development strategies befitting regional characteristics, he will make Chungnam an exemplary case of regional decentralization and balanced development.

To realize an inclusive community that cares for all, he presented his visions, including: the building of a robust social safety net; enhancing social welfare access; fostering an equal nursery environment; realization of welfare for the elderly; prevention of poverty; productive welfare; the establishment of an elementary school childcare system; the strengthening of public support for care system; support for women with career disruption and disabled persons, multicultural families and youth in crisis; and the establishment of healthcare system without blind spots. He added that he will increase the sustainability of welfare by promoting tailored welfare and building an inclusive community to care for the socially disadvantaged.

Governor Kim emphasized that he will ensure ‘life with value and elegance.’

That means he will develop Baekje Culture Complex and Anmyeondo Island Tourist Attraction, establish the Chungnam Tourism Corporation, build a memorial for the army organized in the cause of justice, expand sports facilities for the elderly, and promote daily sports in order to allow all provincial residents to enjoy culture, arts, sports, and tourism.

With regard to a Chungcheongnam-do that respects the opinions of all residents, the new governor said that the drive of Strong Chungnam originates from participation, communication, autonomy, responsibility, and digital administration. He added that the province will establish Chungnam Nambu Office, allow residents to access various provincial institutions, strengthen public education through Chungnam Human Resources Development Institute, build a provincial service system based on autonomy and responsibility, install a metaverse provincial government, create the Chungnam Data Center, realize data-driven digital local government, and draw budgetary support from the central government.

Governor Kim promised to become a governor that keeps promises and respects values by presenting his motto.

In closing, Governor Kim said, “I will be dedicated to executing great tasks for Chungnam as a troubleshooter for the happiness and prosperity of all residents. With perseverance and resilience, I will accomplish a strong Chungnam and offer inclusive public services to protect the socially disadvantaged.”
Before the inaugural ceremony, Governor Kim paid his respects at the Memorial Tower of Veterans Park in Naepo New City and wished for the development of the province and the well-being of residents. 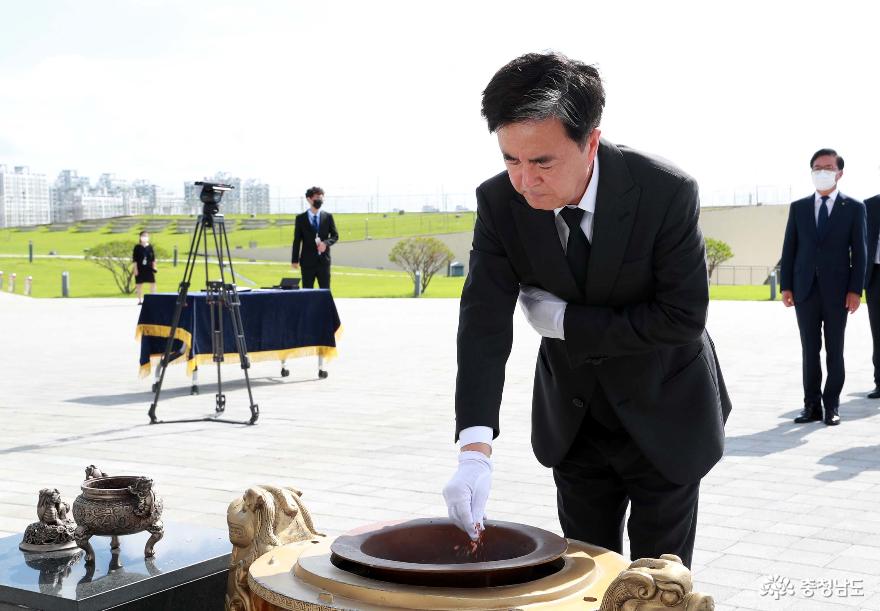 On the first day of work at the provincial government, he presented a letter of appointment to Chun Hyeong-sik, Deputy Governor for Administrative Affairs, and held a ceremony for signing the first document for his approval.