People from 6-year-old children to 98-year-olds are enthusiastic about Geotzu. 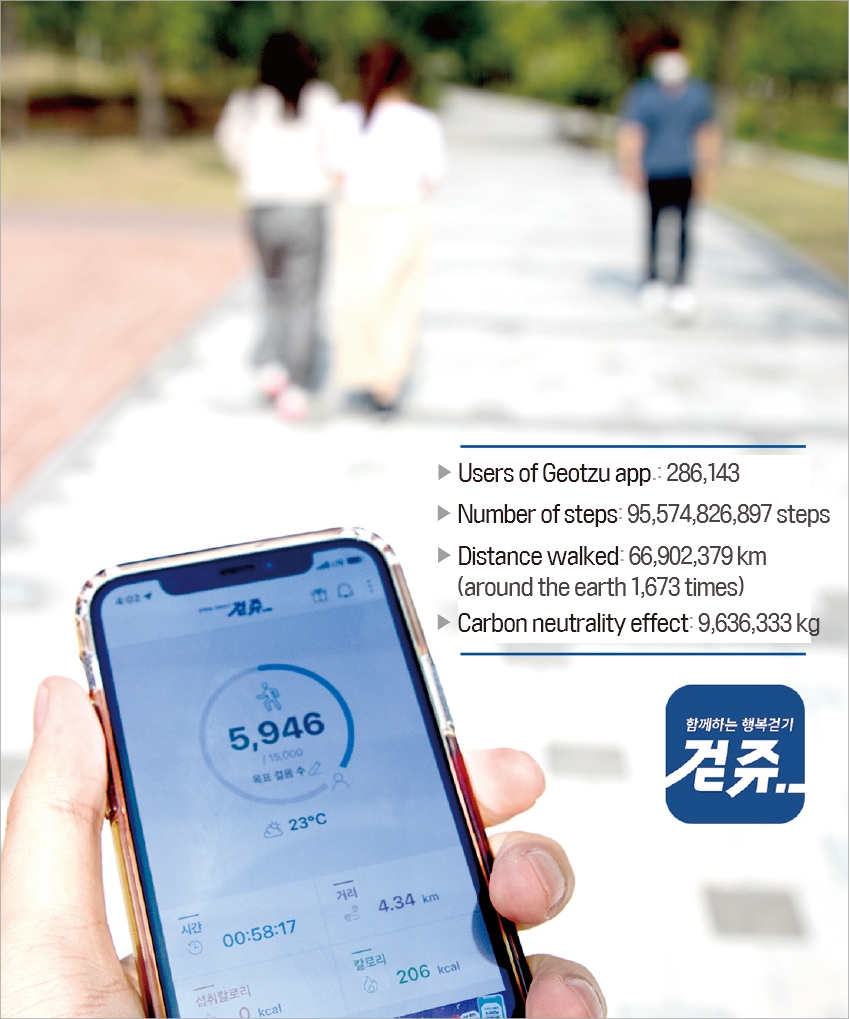 ▲ People are enthusiastic about walking thanks to the Geotzu app, which allows users to check the number of steps, the distance traveled, and the calories burned.

One out of seven provincial residents use the app.
Walk with the Geotzu app 365 days a year

Accumulate points and keep our body healthyParticipate in a contribution campaign by collecting steps
Now to become a member of the Geotzu app.

The app allows users to gather points based on the number of steps and make charitable contributions.

29 months after Chungcheongnam-do launched the Geotzu app, users reached 300,000.
According to the province, the Geotzu app was developed by the province to promote the health of residents under its sports welfare policy.
Users of the app reached 286.413 as of May 20, 2022.
That means one out of seven residents (total: 2,119,296) are using the Geotzu app
Users include 67,751 in Cheonan, 39,280 in Asan, 25,008 in Seosan, 21,653 in Dangjin, and 17,224 in Nonsan.
By age group, there are 62,951 users in their teens or younger, 18,638 in their 20s, 35,829 in their 30s, 59,922 in their 40s, 49,052 in their 50s, 38,416 in their 60s, 18,428 in their 70s, and 2,907 in their 80s.
A 98-year-old user living in Taen is the oldest person, and a 6-year-old child living in Boryeong is the youngest user.
The total steps taken by all users equal 95.574,826,897 steps.
The distance users walked is equivalent to going around the earth 1,673 times (66,902,379 km), reducing carbon by 9,366,333 kg.
A resident in his 40s living in Geumsan has taken the most steps. Since January 2020, the resident has walked 35.25 million steps, or a daily average of 4,892 steps.
The Geotzu app has 2,582 user groups by district, workplace, and school.
Province, cities, and counties have presented challenges and distributed points to promote the use of the app.
Points can be used like cash at cafes or convenience stores.
Seniors aged 65 or older who walk at least 200,000 steps daily receive agricultural products as an incentive for their health promotion efforts.
Regular walking helps relieve depression, prevent kidney disease, reduce weight, improve amnestic disorder, prevent adult diseases, and avoid osteoporosis.
The province is conducting various promotional events to encourage walking through SNS.
The Geotzu app can be downloaded from GooglePlay or the App Store.
Meanwhile, the province urged residents to rest well, drink sufficient water, and observe basic rules for outdoor activities during the summer.