Kicked off the 600 household housing project in Baebang, Asan for rental contracts in 2021 and residents’ move-in in 2022 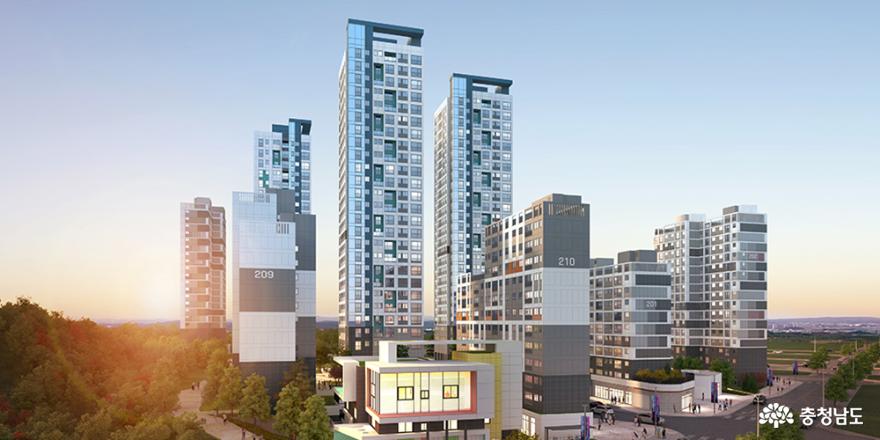 The Province kicked off the ‘Chungnam Happy Housing’ project, a year after the project was proposed. A household will pay half their rent if they give birth to a new baby. When it adds an additional baby, the household will be exempt from rent altogether.

The project is therefore aimed at helping the country to overcome a low birth rate by reducing housing costs and providing housing suitable for childcare. The housing to be built through the new project will be exclusively for rent. The project has started after securing all the necessary permits and licenses based on its carefully prepared construction plan as part of Chungnam Happy Housing.

With the budget of 136.9 billion won, the project will construct 10-25 story apartment buildings with two basement floors at Block 2 of the Asan Baebang-Wolcheon District Apartment Project in Buksu-ri, Baebang-eup, Asan. The public daycare center in the complex will have 933.5㎡ of floor space in a threestory building equipped with 10 nursery rooms, multiple playrooms, a large auditorium, and a teacher's lounge. The 600 unit complex will comprise 60 36㎡ units, 180 44㎡ units, and 360 59㎡ units.

The housing is designed in seven types including units for would-be couples optimized for married life and child-birth; units newlyweds and young couples customized for childbirth and childcare; and units for multi-child families tailored for grown-up children.

The Province is planning to announce rental contract details in September 2021 so that residents can move in as soon as the project is completed in 2022.

The Province plans to build a total of 5,000 rental housing units in the Asan area with high demand with 1,000 units supplied by 2022, including the 600 units that have just kicked off. Chungnam has secured an additional 10.2 billion won in addition to its 39.3 billion budget allocated to the Chungnam-type Happier Housing Project as part of the central government’s recent crisis relief package.